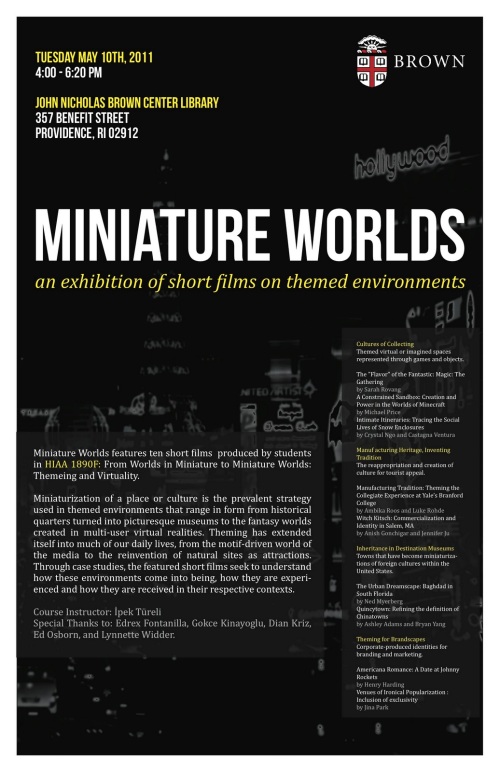 Comments Off on Miniature Worlds (2011) exhibition!

Please post your response by April 11, 4 pm. It will be based on the following readings:

Campanella, Thomas J. “Theme Parks and the Landscape of Consumption.” In The Concrete Dragon: China’s Urban Revolution and What It Means for the World, 240-80. New York: Princeton Architectural Press, 2008.

Please post your response by April 04, 4 pm. It will be based on the following readings: 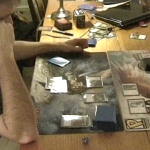 The “Flavor” of the Fantastic: Magic: The Gathering by Sarah Rovang | Since 1993, the trading card game Magic: The Gathering® has enticed millions of players with a unique quality the players refer to as “flavor,” which is comprised of the artwork and italicized text that appears on the cards. Grounded in the notion of “flavor,” this project posits that themed landscapes can exist as conceptual constructs manufactured by individuals and communities through a participation in a structured activity. 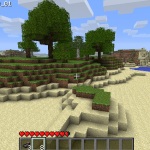 A Constrained Sandbox: Creation and Power in the Worlds of Minecraft by Michael Price | Minecraft is an online multiplayer construction and resource-mining game in which players colonize a nature made of collectible and placable cubes of materials. A Constrained Sandbox is an investigation of the pleasures of creation, sharing, and habitation within a virtual space, as well as the power dynamics that arise between players-as-guests and players-as-server administrators.

Intimate Itineraries: Tracing the Social Lives of Snow Enclosures by Crystal Ngo and Castagna Ventura | As worlds contained in miniature, snow enclosures (domes and globes) act as metonymic devices that evoke experiences ranging from delight to disaster. Not merely metaphors of another time or place, these nostalgic objects also reflect desires to keep imaginary knowledge nearby. We trace some of the social lives inhabited by these simulations. 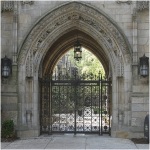 Manufacturing Tradition: Theming the Collegiate Experience at Yale’s Branford College by Ambika Roos and Luke Rohde | This project will examine Yale University residential colleges, specifically Branford College, as themed environments.  Yale’s 12 residential colleges are regularly cited as an important part of life at the university among students and features heavily amongst promotional material and camps tours.  We propose that the university re-appropriates its revivalist architecture as a theme it uses to foster an image of elite education rooted in history and tradition. 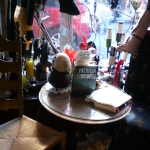 Witch Kitsch: Commercialization and Identity in Salem, MA by Anish Gonchigar and Jennifer Ju | The Salem Witch trials left an indelible mark on the Massachusetts city. Today, Salem is home to “Witch Tourism” and bears the informal moniker of “Witch City.” So how do modern-day practitioners of witchcraft feel about Salem? How do real witches feel about the commercialization that has greatly affected Salem?

Storrowton Village by Alice Hines | How does one represent New England? Storrowton Village, a miniature museum-town in West Springfield, MA, draws on the region’s history. Made up of 18th and 19th c. buildings donated by different New England states, the village was assembled in 1926 on the Eastern States Exposition fairgrounds by philanthropist Helen Storrow. 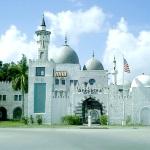 The Urban Dreamscape: Baghdad in South Florida by Ned Myerberg | Inspired by an illustrated copy of The Arabian Nights, aviator-turned-developer Glenn Curtiss built the city of Opa-Locka, an “Arabian Fantasy”-themed town on the outskirts of Miami, Florida. Today Opa-Locka suffers with one of the highest crime rates of any American city, all set against the ruins of Curtiss’ visionary town. 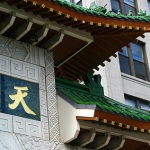 Quincytown: Refining the definition of Chinatowns by Ashley Adams and Bryan Yang | Now with three times the Asian population of Boston’s historic Chinatown, Quincy is gaining attention as a rising Chinatown and potential competitor to its established neighbor. However, the two cities greatly differ in their urbanity, history, and racial makeup; could the term Chinatown encompass such a range of city types and social structures? Or does it require the deep history rooted in theming and tourism that Quincy lacks? 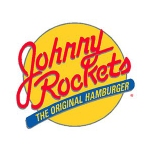 Americana Romance: A Date at Johnny Rockets by Henry Harding | Imagine the year is 1950 in America and you are about to go on your first college date. You are searching for a restaurant that serves affordable, great-tasting food in a fun, feel-good environment. Where else to go but Johnny Rockets! In this five-minute fictional narrative, the viewer will encounter a joyous glimpse of the past that is the backbone to the Johnny Rockets experience.

Venues of Ironical Popularization : Inclusion of exclusivity by Jina Park | Venues can help popularize cultures that pertain to particular groups of social class, race, or other sub groups of society. When popularized, the exclusive subculture can gain immense popularity among the curious masses. I will be looking at Urban Outfitters with its theme of the modern day “hipster” culture, an example of an exclusive, anti-mainstream cult, and investigate how the venue’s expansion of the culture has altered the original and what its implications are for the future of appropriation or theming of cultures.

Comments Off on Projects

Posted in ABOUT US

Posted on March 21, 2011 by Ipek Tureli | Comments Off on Review I Schedule

Comments Off on Review I Schedule

Posted on March 21, 2011 by Ipek Tureli | Comments Off on tilt-shift Disneyland Paris 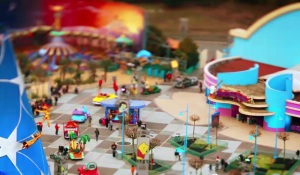 shared by Bryan: “The tilt-shift method of filming makes the entire park look like a miniature! “

Comments Off on tilt-shift Disneyland Paris

Comments Off on Review I – guest critics

Since we have the first review next week, we will not have time to discuss the readings. So please write your response paper only on the film,The World (2004) by director Zhang Ke Jia, streamed on My Courses, and the readings are now optional. We will come back to some of the ideas in these readings in the coming weeks. And I hope that Zhang’s film will be inspirational for your own creative work.

The World (2004) by director Zhang Ke Jia [This is a famous feature film on lives of workers in a theme park. Streamed on MyCourses].

Errington, Shelly. “The Cosmic Theme Park of the Javanese.” In The Death of Authentic Primitive Art and Other Tales of Progress, 188-227. Berkeley: University of California Press, 1998.

Please, submit your reading response by March 14, 4 pm (24 hrs before class) based on the following readings by Davis and Sorkin:

Please, submit your reading response by March 07, 4 pm (24 hrs before class) based on the following readings and film:

Coney Island: The American Experience (1991), dir. Ric Burns, streamed on MyCourses [to be viewed before class]